In the summer of 1975, I found myself sitting in the back of a small 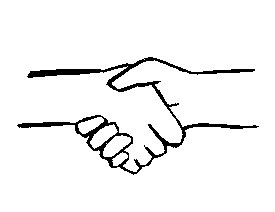 country church. The service was over and the people were making their way out. Everyone stopped to shake hands with the preacher. I noticed one man saying, “Thank you, thank you,” as he held the minister’s hand. I said to myself, “What’s in a handshake?”

At that time I felt cynical toward religion and old country ways. Basically I was about getting some money, having some sex, getting high. But my wife had heard about a powerful preacher down in Georgia who was also a regular, down-to-Earth man. I went down with my wife to hear him preach and I went back a second time with my mother.

Being respectful, I made my way to the front of the room to shake his hand. Then I looked at my mother and said, “I feel good.”

The feeling didn’t last long, but unknown to myself, I had just changed lanes on the road of life.

I was from a very close, tight-knit family from the rural South who came up to New York when my grandmother got sick. We’d been sharecroppers in South Carolina.
When we came to New York, we had to adjust. Well, I know I did. Tall buildings, busy streets. My mother, grandmother, aunt and uncle and I moved from one rooming house to another.

Soon I adjusted. By junior high school I did everything: sports, student government, and dating a different girl every week.

I Needed a Guide

But in high school I went from being the most popular person to feeling a deep depression. I especially missed my father and felt I needed his guidance, but he was not the kind of man who could have led me through the world.

In time, with the help of a few friends, I got into drugs. Weed, coke, heroin, pills, all that. I didn’t know who I was, what I wanted. I had no plan for my life. Without a plan, you can be persuaded to do most anything. I thought I was doing fine—I was working and spending my money on good times that I felt I’d earned.

Being weak, as most people are, I didn’t listen to the quiet voice in me that spoke of values, of hard work, discipline, patience and family. I needed a teacher, a guide to help me live a moral life.

My mother got her guidance in church. She was even called to be a preacher. When I asked my mother to make a decision, she’d say, “I have to pray about it,” or, “I have to wait on the Lord.”

This used to frustrate me. “Pray about what? Just make up your mind,” I’d say. “Why do you love to pray?”

I was not religious. But the way I see it, my drug use and confusion set me up to have a powerful awakening.

I was about 25 when I went down to that country church and met Doc, the preacher. It didn’t take long for me to recognize Doc’s strength, for he was a doer. He was never alone. He was always helping someone with a need or a problem.

Doc was tall, slim, very dark-skinned, strong. Eyes like Superman—penetrating. And he was a powerful speaker. When he preached, it was as if he was there with Jesus himself.

I wanted to find out what Doc was working with, what gave him his power. It seemed like anything was possible for him. I wanted to please him, to be guided by him, to know myself, and to become powerful like him.

Despite all my mother had told me about God, I had been too locked up in what the world had taught me. I was so hard-headed that I needed a stranger to reach me. Funny how you can listen to a stranger but not your own mother. That’s why we have preachers – so you can hear the words of God, and hear yourself, your own words.

I started going down to see Doc preach about four, five times a year for the next seven years until he died. Sometimes I’d drift off, and then I’d return.

Doc preached the power of prayer, faith and action. He’d say, “Prayer changes things” and “Material things will get you nowhere.” Up front and in your face was his style. Doc was a man of contrasts: Confident yet humble. A rich man, he still drank water from a jar. He had a light side about him. He liked to tell a good joke every now and then.

Listening to Doc preach, discuss current events and comment about life seven days a week, I learned the habits of mind that lead to success.

There is no doubt that I was inspired to be like him. Inspiration was not enough, though. I needed to develop maturity, strength and sensitivity to the needs of others.

The first step I took was to stop using drugs. Not long after I quit using, my co-worker came in excited one day because Muhammad Ali had fought George Foreman and won back his title. My co-worker told me, “I was so happy that Ali won that I saved this for you.” He gave me some coke.

“Thanks,” I said. I did not want to turn him down and upset him. Later that afternoon I thought, “Oh, a little won’t hurt.”

As soon as it hit my nose, I felt low and ashamed. I did the math real quick and decided that the feeling in the church was better (and cheaper). I was not getting high no more.

Soon after, the drug dealer on my block asked me why I wasn’t buying from him. I couldn’t think of anything to say. Then, “I am saved,” came out of my mouth. That kept him away!

More Experiencing to Do

My next step was to start to seriously think about God. As much as I was moved by Doc’s spirituality, at first I thought, “Prayer? Well, that takes too long. I will get what I need for myself.” Or I’d think about Doc’s saying, “Material things will get you nowhere.”

“Are you kidding me?” I’d think. “I love me some cars.” It’s reasonable to say I had some more experiencing to do.

Doc was a constant reminder to me of the country values I grew up with. I’d come from a real simple life. Our life on the farm was all about survival. My grandmother would go into the woods and cut sarsaparilla to make tea. We recycled all types of containers: We drank from jars and used flour sacks to wash with. Little girls went to school dressed in burlap and you knew they had nothing. We worked the land and got paid twice a year. That money had to last.

I didn’t have everything I wanted, but I had all that I needed. We had honor, respect, pride and sincere ambition. My family didn’t have many dreams. Their hope was for my sister and me. Mother’s dream was and still is to see me preaching the word of God.

Finding My Own Way

Doc did not give me all the answers I yearned for. He didn’t become the father I felt I needed. But Doc kept me searching for the path laid down to me as a child.

In the past few years, I’m proud that I’ve become more of a leader in my community, Bed-Stuy. First I helped my son organize a neighborhood football league. Starting our team, the Titans, was a hard job. We began with just two team members and, with passion and faith, built four teams. I was proud to see more than 100 children participating in our games.

Now I am taking a class at the Child Welfare Organizing Project to become a parent leader in my neighborhood, helping parents keep their children out of foster care. These are people who often feel faceless, voiceless, stuck. I’m excited to use my energy, skills and knowledge to help other families. To me, it feels like the slow building of another movement to stir our nation’s consciousness, another coming out from the back of the bus.

A Gift, My Guide

Faith, prayer and action have helped me become someone who can give back to his community. Doc was a gift, my guide. He showed me the kind of man I wanted to be. To realize the gift, I had to strengthen my faith in God and change who I was in my thoughts and actions every day.

To this day, the impact of his handshake has never left me. Doc was a sign along the way. He watered the seeds inside me.