I was adopted from foster care when I was 5 years old. I didn’t 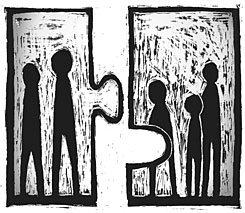 remember my birth family and didn’t know I was adopted until I was about 9. One day I was playing tag and running around the playground with a friend after school.

When my adoptive mother, Mrs. Anderson, pulled up in her little blue Pinto, my friend said, “Who is that?”

“No, she’s not. That lady is white. How can she be your mother?”

My skin was light brown and I had long, dark brown hair and dark brown eyes, while my mom had white, fair skin, blond hair and blue eyes. I knew something was different but just accepted it. We had the same last name and we lived in the same house.

But at that moment, I realized she probably wasn’t my mom from birth. I was so sad and confused, and also a little relieved, because Mrs. Anderson and her family were abusive toward my sister and me.

I went home with my mother in her car and just thought about what my friend had told me. That night, I asked my older sister Eileen if it was true. She told me, “Yes, it is, but don’t worry about it.”

The next night I told Mrs. Anderson what had happened and she asked me to come into the living room so we could talk about it. I was scared because everybody else was already in bed. She came in and sat down holding a little pillow.

She told me that Eileen and I were adopted because our parents could not take care of us. Then Mrs. Anderson showed me the pillow. It was white and round, with dark pink lace around it and a picture of a teddy bear hanging up clothes. The pillow also had my real name on it: SYLVIA. She said my biological mother had given it to me.

I wish I still had that pillow.

After that conversation, I started to have dreams about my mother. In my dreams, she would have long black hair like me and would be round but not big. Her face would be covered and I could never see her.

I really wished that I could at least remember my mother and father, and let them know that I was OK.

Searching for My Mother

After I realized I was Mexican, I started hanging out with the Mexican girls in school but I wasn’t accepted because their families spoke Spanish. Plus, when Mrs. Anderson showed up at school, they would just stare, trying to figure it out.

As a teenager, I ran away from my adoptive home to look for my mother. I went in and out of a children’s shelter, foster homes and the streets.

Looking for my mother was very hard because I didn’t know where to look. I knew she might have been in Bakersfield, California because that’s where I lived, but otherwise, I really had nothing to go on. I was just hoping that my mother would notice me in the street and my search would be over.

When I ran away, I would sleep in the park at night trying to get warm. At 14 years old, I would be curled up in Mount Vernon Park, trying to get comfortable, and thinking about my parents: “Where are they? I wish I was with them.” It hurt to think that my mother, especially, had left me.

My social worker at the children’s shelter told me that my mom’s name was Margarita Perez and my dad’s last name was Perez as well. My mother was born in Arizona and my dad was born in Texas, and they were of Mexican heritage but American citizens. The worker said my sister and I were placed in foster care because my mom and dad were alcoholics and my dad was abusive to my mother.

Then, when I was about 15 years old, I needed an ID but had no proof of who I was. I told my boyfriend that my real name was Sylvia Perez. I really don’t know how, but he got my original birth certificate with my parents’ names on it. That was as close as I got to them.

As I got older, I began to wonder what it meant that I was Mexican. I had met a Mexican-American boyfriend who was so nice to me. His family took me in, he got me a job, and I was allowed to follow his gang, the Lomita Bakers. I wished I spoke Spanish and I that I’d been born in Mexico.

Now that I am older, it’s still hard for me that I don’t really feel Mexican. When I fill out forms, I always put Mexican as my ethnicity. Sometimes I feel proud to be Mexican. Other times I just want to feel normal and not worry about other what people think since I don’t speak Spanish.

I connect with Mexican culture in my church. It’s Catholic and attended mostly by Mexican families that I have known for years. They know why I do not speak Spanish and they accept my daughter and me.

During my teenage years I began using drugs and was heavily addicted for many years. I had six children that I did not raise. I wonder, “Do they hate me? Do they think about me? Do they wonder if I am dead or alive?”

Four of my children were raised by their fathers’ families, and two were adopted from foster care. The oldest, Chubs, lived with my husband, Hector, and me for three years. I remember Hector carrying Chubs everywhere, taking him to work and playing with him. When the system took Chubs away, Hector especially missed him and said he hated to see him in the system. But like me, Chubs was so small when he was separated from his parents. I truly do not think that Chubs remembers those times at all.

But Chubs does know us. After our two boys, Hector and I had a daughter who also went into foster care and lived with her brothers. While Lydia was in care, Hector and I got clean and we saw our two sons often. We even celebrated their birthdays together. I always expected them to ask me questions, like, “Sylvia, why did you give me away?” But they never did.

Now my sons and I are not in touch, because soon after Lydia came home, the boys’ adoptive mother cut off contact with us. I feel sad that my sons are growing up separated from their parents, with the same unanswered questions as I had. At least they got to know me for a short time and could understand why they were adopted.

These days I mostly think about my parents on certain holidays. Lydia is very understanding when she sees me cry, especially when Christmas and my birthday come around. But I try to fight my tears when my daughter asks me about my mom. I tell her the truth: “I do not know my mother or father. Some people took care of me and raised me.”

I reassure Lydia that I won’t abandon her. I tell her, “I love you so much and I will do everything to make you happy.”

Still, I feel sad that Lydia doesn’t know her grandparents on my side of the family. Sometimes Lydia says, “I wish I had another grandma.” She doesn’t get much attention from Hector’s mother. I wish Lydia had a grandma who called just to see how she was doing, or took her out to a movie or to the park to play.

I wonder if my parents are still alive and if they are OK. I wonder if they would be there for my family if I had them in my life today. I imagine we might go to church together. Just thinking about it hurts.

I still wish to God that I had my parents to talk to and to give me support on a daily basis. I wish I could say, “Daddy, I love you,” and, “Mommy, I love you.” Even after all these years, I crave their affection and wish I could feel their hugs.