I have been trying to find new ways to channel my anger. At times, I feel that I have my anger under control and other times I feel like I am 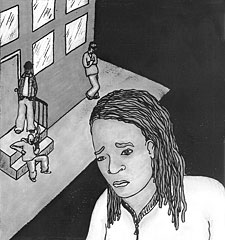 Typical ways that I used to handle my anger? Blowing up, throwing things and saying things that I later wished I could take back.

One typical moment: years ago, my kids’ father and I got into an argument over our dog, Max. My boyfriend was working the graveyard shift so he was tired. I was pregnant with our first son, so I was also tired.

“Can you please take Max out? I’m not feeling too good today,” I asked politely.

“I don’t feel like it. You’ve been home. Why don’t you do it?” he answered in a nasty way.

“Our agreement was that we would take turns, and today is your turn,” I answered, already feeling totally pissed off. He just turned around and walked out.

At that point, I was so angry that I knocked everything off my dresser. Perfumes, lotions and figurines went flying and most of it broke.

“Oh, that was very mature,” my boyfriend said. “Guess what? Now you just have to clean up that mess.”

My boyfriend was being rude. He didn’t care if I was pregnant and feeling bad. His mocking didn’t help me feel any better, either. But it was true that my angry actions had only hurt me, and I was ashamed that I lost control

From Fearful to Feared

Growing up in a home where there was domestic violence played a huge part in how I learned to handle my anger. When my father got angry at my mother, he would beat her. When things weren’t done right, he would throw things around or flip furniture upside down.

When people around me fought, I felt very afraid and nervous. I would start to cry, hide in the closet, or even urinate on myself.

But when I got older, I would react to situations angrily myself. I didn’t know how else to deal with my anger. I thought that was the only way to react.

I knew that I had to do something about my anger. I did not like who I was becoming and was afraid of what I could do to someone when I was angry. When I got upset, I was nasty and disrespectful to people around me, especially to people who had nothing to do with my situation. I would say things that I didn’t mean. I learned that words hurt more than a slap in the face.

My mother helped me see that my anger was affecting my children. When I got angry at someone else, I would take it out on my children. I would get upset about the dumbest thing, and when my kids wanted to play with me, I would tell them, “You know what, I don’t feel like playing right now.”

One day my mother gave me a little wake-up call. She said, “You know what? The kids are not the reason you are upset, so don’t take it out on them.”

A turning point for me came the day I got so angry at my son that I hit him. It happened when my son was 6 and I had allowed him to visit his half brother for a week.

When he came back, I asked, “So, how was your week?” I was excited to see him again.

“What do you mean, OK?” I asked. “You must have done something exciting.” But he didn’t answer, and I could tell something was wrong by the look on his face.

Later, my son told me that his half-brother’s mother had told him that I was the reason his father was in jail. I felt betrayed and hurt. It was hard for me to calmly explain to my son that his father was in jail through no one’s fault but his own. I told him, “When you do things you shouldn’t, there are consequences.”

After that, my son seemed to calm down. But when I told my son to get ready to take a bath, he said, “No” and called me a b-tch. I was hurt and enraged. I slapped him across his mouth. I slapped him so hard I made his mouth bleed.

I Began to Cry

After I slapped my son, he cried, and then I began to cry. I felt really, really bad. I saw the blood coming out of his mouth and I thought to myself, “Oh my gosh, what did I just do?”

Looking back at that moment, I realize now that I was upset at his father’s family, not at my son. It hurt me to know that they blamed me for his father’s mistakes. In the past, I had tried to shrug off their attitude, telling myself. “Carmen, it’s not your fault.”

Underneath, though, I was still hurt. I was also upset that I couldn’t control what my son heard about me. But at the time, I didn’t realize how angry I had become until I slapped my son.

How Do I Change?

At that point, I promised myself that I would never lift my hands to my kids again. But I did not know where to go for help. Sometimes I would cry at night because I felt like I was out of control. I was afraid that I would hurt myself or the people around me. I didn’t feel like there was any hope for me until I ended up taking a parenting class that taught me how to calm down.

In the parenting class, I learned that being angry is like a flight of stairs: you can either go down or up. If you don’t pay attention to how you feel, you will probably go up and up. But you can learn to come down.

The teacher told us that if we figured out what made us angry, we’d have an easier time controlling our anger. That made sense to me. I had almost never paid attention to what made me angry. By the time I figured out why I was upset, the damage was done.

New Ways to Calm Down

In that class, I asked myself, “Why do I get so angry? What and who makes me feel that way? How do I know that I’m getting mad?” I learned to recognize my trigger points—the situations that tend to get me mad.

I also noticed that when I start getting angry, my heart starts racing and my palms sweat. I learned to react to my body by asking myself, “Is this really worth getting upset about? Can you let this go?” I found that, by paying attention to my reaction early on, I can sometimes nip my anger in the bud.

It hasn’t been easy for me to change the way I react to situations that upset me. But I’m doing a lot better handling everyday situations that used to get me very angry—and apologizing if I lose my cool. I am getting better at shutting my mouth until I calm down.

I’ve also learned that when I’m feeling really aggravated, it helps if I take myself for a walk, or pick up the phone and call everybody I know until someone picks up. Other times, I just cry and tell God how I feel and keep crying until I don’t feel angry anymore.

Just recently, I had an upsetting experience with my son. We were on the train and my son said, “Uh-oh, Mom, I don’t have my book bag.”

“What do you mean you don’t have it?” I replied.

“I thought I had it on my back but I realized that I left it in the gym,” he said.

“What do you mean you left it in the gym?” I yelled. By then, we were halfway home. “You know what, Isaiah, you need to learn how to be more responsible for your stuff!”

Already I was feeling angry. My palms were sweaty and my heart was racing. I said to myself, “Calm down! You never forget something and remembered it at the last minute?”

As calmly as I could I said, “Let’s hope that when we get to the gym, your book bag is still there.”

Isaiah became angry and didn’t want to speak to me. He murmured under his breath. I told him, “There’s no reason to be disrespectful. I’m not the one who lost your book bag. You did that all on your own.”

But once my son and I had time to calm down, we apologized to each other.

“I’m sorry I disrespected you, Mommy. I promise to be more careful with my stuff,” he said.

I’ve had to help my children un-learn negative ways of responding to anger that they learned from me.

For many years, I did not realize that my children were watching my every move and learning from my example. Recently I noticed that when my kids get angry, they hit each other and throw things.

I had a heart-to-heart with my children to let them know that this is not the way to express their frustration. Slowly, my children are learning how to calm themselves down.

Once I was watching my son play his PSP. I could see that he was frustrated.

“I can’t beat this stupid level,” he said.

“Well, you need to calm down. Take a deep breath before you try again,” I said. He turned the game off and put it in his pocket.

Proud of Myself and My Son

A couple hours later, I saw my son playing the game again.

“Mom, remember that level that I couldn’t beat?” he said.

“See what happens when you take a second to calm down?”

I was proud when I saw that my son was trying to find a new way to deal with his anger. I had never realized how much he was paying attention when I spoke to him.

I am also proud of myself. Dealing with my anger is a process. I still have moments when I feel out of control, and I have to remind myself to take things one step at a time. I know I’m not going to fix all of my issues with anger in one day. I am just glad that I have my reactions a little more under control and that I’m trying my hardest to keep myself calm.