As a parent who has had children in foster care, the word “testifying” 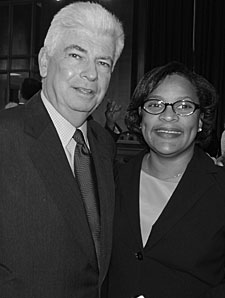 usually brings to my mind fearful situations where one’s future is in the hands of some powerful person, usually a judge. But when I was asked to testify in front of the United States Senate Subcommittee on Children and Families about my experiences getting help through Parents Anonymous, I was quick to respond with a resounding “Yes!” I wanted to tell my story so that other parents could benefit from the support that helped me strengthen my family.

Speaking Up for Parents

Parents Anonymous, which runs weekly support groups for parents in many states across the country, was looking for a parent to speak to urge Congress to reauthorize a bill called CAPTA (Child Abuse Prevention and Treatment Act). CAPTA provides millions of dollars of funding to states to improve their child protective systems and to organizations that support families in order to prevent abuse and neglect.

In 1973, when CAPTA was first passed, the co-founder of Parents Anonymous, a mother named Jolly K., testified before Congress about her abusiveness toward her children before she got help. Her testimony was shown on television and helped Congress decide to pass CAPTA, which provided funding to Parents Anonymous.

To be selected to testify, I had to get interviewed about my experiences getting CAPTA-funded services through Parents Anonymous. I have never been much of a sit-and-wait person, so I called the interviewer right away and she conducted the interview then and there! I told her my story of feeling despair, guilt and shame and finding hope and the confidence to believe in myself as a parent.

From Despair to Hope

As I explained in my testimony, I became homeless and hit rock bottom in 1998. My addiction to crack cocaine interfered with my ability to provide a safe and nurturing environment for my children. I did not want to be a parent anymore because I was caught in the grip of my cocaine addiction. When I had my third and fourth children, 18 months apart, I felt overwhelmed and unprepared to take on the daunting task of raising two young boys.

I was faced with the most important choice of my life – my children or the drugs. I chose my children. Then the real work began.

First, I made a commitment to become clean and sober. Then I entered an outpatient drug treatment program and moved into a homeless shelter. My family and I were able to attend the weekly parent and children’s meetings at the shelter and then at Parents Anonymous after we found housing.

Through the support of the other parents, I was able to share my deepest fears, insecurities and feelings of shame and guilt for neglecting my children because of my drug addiction. The other parents in my group helped me identify my strengths and find the solutions that worked for my family and me. I replaced my feelings of helplessness with hope and found the courage and strength to make lasting changes in my life. I no longer felt I didn’t want to be a parent.

I am now going on 10 years in recovery. I am attending college full time, committed to obtaining a degree in communications. I am a stronger parent and my children are thriving.

My children became a joy to me. I’ve learned that if you treat children as valued human beings, you’re going to get it back. Be fair, honest and respectful and your children will grow up to be productive and caring adults.

My journey began with a focus on my own struggles to turn my life around. But by strengthening my own family and receiving training and support, I was also able to develop my leadership skills.

In Columbus, Ohio, where I live, I now serve on several Boards of Directors, including Legal Aid of Columbus, Columbus Child Development Council, which oversees Head Start Programs, and the Godman Guild Community Center. I am also the co-founder of a recovery ministry. I believe in giving back because I have been blessed to receive so much.

On the national level, I serve on the board of the Parents Anonymous National Center on Shared Leadership, as well as the Parents Anonymous, Inc Board of Directors. I am a founding member of a group to establish a national birth parent advocacy organization and am on the Research Advisory Committee of Casey Family Programs. With Parents Anonymous staff, I have written training curricula and provided technical assistance to agencies nationwide that are developing services to support parents to prevent abuse and neglect.

Like so many other parents, I made positive changes in my family by getting help from one of the many organizations funded by CAPTA. My involvement with Parents Anonymous has given me so much in terms of support, confidence, leadership skills and a strong family. I wanted to testify so that parents nationwide will continue to have the same chances I’ve had.

The day came (finally!) when I received a call from the CEO of Parents Anonymous, Dr. Lisa Pion-Berlin, telling me that I had been chosen to testify! I flew to Washington, D.C., where Dr. Pion-Berlin met me. I felt strongly supported knowing that she and the whole organization were behind me, cheering me on.

On June 26, 2008, I testified at the Capitol Building as part of a panel of speakers. Sitting there in front of such important men, in a room that looked like a big courtroom you might see on television, I was nervous. I was the only person on the panel who didn’t have letters behind my name—you know, letters like MSW or Ph.D.

Senator Chris Dodd from Connecticut welcomed me and said something I will always be grateful for: that I was the most important person there, because I was putting a human face on the issues facing parents all over the country. Senator Dodd said I was performing a national service! Wow! What a responsibility!

I began my testimony, heart pounding. I was dry mouthed but afraid to drink from my water bottle because my hands were shaking. I prayed that my voice didn’t crack. I told the senators my personal history and described the changes I’ve seen in my family as I became a role model to my children.

My children have followed my leadership, giving back to our community. My oldest son is a wonderful father to my 7-year-old granddaughter. My younger boys, 9 and 11, are happy, healthy and successful students. They participate in a non-profit organization here in Columbus that donates bikes to kids who give their time to repairing the bikes. They learn to use their own manpower to do for others. I like that they are outside instead of in front of the video games! One son helps out in his art class in school and another helps train other children on computers. Both are very active in our church.

My 18-year old daughter is self-assured and confident. She has just graduated from high school and is going on to college. My daughter is also contributes to our community: she is a peer counselor at her high school, has been a camp counselor for several years, and is a Children’s Program volunteer for Parents Anonymous in Columbus.

Several years ago, I received the greatest compliment from my own mother and family members when they acknowledged the positive changes in me. After seeing the way I handle my youngest boys, my mother said that she wished she had hugged my brothers more so that they might have become better men.

After telling my story, I concluded my testimony by saying:

“My story is not unique. I am no more special than the hundreds of thousands of other parents who are out there working to conquer their own personal demons. I am here giving a voice today to the family-strengthening message as one example of hope and change.

But we cannot forget the thousands of parents who are struggling with their parenting and other problems right now and do not have the courage to ask for help, or for whom there is no program or supportive person in their life to turn to. Strengthening CAPTA so that vital federal dollars support prevention programs, like Parents Anonymous, will save the lives of thousands of children and their parents.

The CAPTA reauthorization process is still in progress, and I’ll never know what impact my words had on the senators I spoke to that day. But I am proud that I played a part in helping families nationwide.

It is my hope that our lawmakers continue to listen to real people who can help them understand the issues facing families.

I also hope that parents recognize that they have the power to improve their lives and the lives of their children, and that we can find ways to advocate for all families and for the organizations that help families succeed.