Ever since my son was little, I hoped to be able to travel to Mexico with my new family. I wanted Jason to know his grandparents and the place 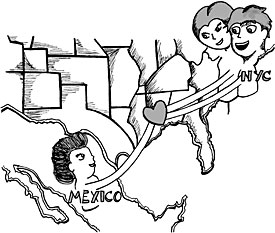 where I was born and lived until I was 12 years old.

It was necessary for me to come to the United States to work and help support my mother and younger brothers. In Mexico, the salaries are very low. And I’ve had good experiences here. This country is like an adoptive mother, allowing me to come in. But by leaving home, I lost the opportunity to be by the side of my very loving and brave mother.

I miss everything about Mexico: the food, the traditions, my people, my mother and my family. I miss the air, especially on afternoons just after rain. I miss seeing the dawn, hearing the songs of birds, and the ringing of bells announcing another day.

My son has the advantage of being an American citizen and being able to travel wherever he might like. But I consider my son to have a childhood with very little freedom. Here we don’t have space like in my home in Acatlan. In New York, we live in a small room in an apartment we share with another family. All together it has three rooms, a kitchen and a bathroom.

Our neighborhood is very noisy, with people around that you may know by sight but nothing more. Very few people lived in my childhood community—maybe five extended families. We respected each other and protected each other from the dangers we faced.

I teach my son about the area where I grew up, a place with trees of many different sizes and colors and fields that you can walk through barefoot, with some short grasses that just cover your toes, and others up to your waist. There are different birds flying and singing and walking in the grass looking for worms and the seeds and fruit that fall from the trees. There are many pretty flowers, beauties with an agreeable smell.

I always tell Jason, “Mexico is a very good country, with different traditions and forms of dress depending on the state where you live. We’re Poblanos.”

“Because the area where your grandparents live is part of the state of Puebla.”

“Well, it is called Acatlan, Puebla. The climate is hot most of the time. Only around Christmas does it get cold, but there’s no snow. It rains the same as here, with lightning and thunder.

“There are a lot of trees, and most people have cats, dogs, birds and gardens with flowers of different colors outside their homes. The markets are about 20 minutes from my mother’s house. There are people selling fruit, flowers and beans on the side of the road, on a piece of blanket or a little table.”

But it’s difficult to imagine another land that you’ve never visited.

We finally were able to travel to Mexico together four years ago, when Jason was 6 years old. It had been seven years since I saw my mother, and was only my second visit since I left home.

The first time I went home alone. This time I returned with my husband Gustavo and Jason. I felt proud of my new family but nervous bringing other people home with me. I couldn’t wait to see my family waiting for us, and to be in my mother’s house, enjoying to the maximum our farm where Jason could see, touch, admire and breathe in a different environment.

We arrived in a taxi with five suitcases. As the taxi stopped and we got out, I saw the trees and flowers, and then finally the little face of my mother, who was at the door of our house, waiting. I hugged my mother and cried, kissed my nephew, and then presented my family to everyone.

I found my mother different from the passing years. Her hair was not as black; in the front were gray hairs. Her body was more bent, her hands mistreated; they had aged. Her face was marked as if the solitude had given her a permanently sad look. That’s the first impression her look gave me, but after a moment, her eyes, face, and voice filled with happiness and joy.

Inside, I found my things: photos, books and my bed. Jason liked the house. He could run, yell, jump, and leave things out of place because we had room. He said, “Mama, I like this big house with a garden and a room just for me.”

I had feared he might not like my home, or even the flavor of the food, the water, or the milk, or that his stomach would reject them. Another worry was that he might get a dangerous bite, because we have scorpions, bees, wasps and stray dogs around.

I was attentive to him and surprised that none of my fears came true. On the contrary, he was curious. He was always asking, “Mama, what’s this?” “Why is this like that?” “What does it do?”

Watching him walk around and play freely, I felt that he enjoyed nature like I do, and I felt tranquil and very happy.

He liked to play a lot. From New York, we’d brought a few toy cars and Power Rangers, his favorite, and in Mexico we brought him to the center of town, where we got him toy horses and his father bought him a train set. Because we had so much space, he made a long line with his dolls, the horses and the train, which he imagined was traveling a long way.

I felt happy seeing my son playing, running and shouting with his cousins and his grandmother. He chatted and looked at everything around him. If he wasn’t familiar with something, he would ask (although sometimes my family would ask me for a translation, because his Spanish wasn’t too clear. He would say some words in English. The curious thing was that everyone, from his cousins to my mother, learned a few words in English.)

One special moment was crossing through the wild countryside with my mother, one of my sisters and her children, and my husband and son. We went wearing pants, long sleeves and hats to protect us from the sun.

We ate wild fruits. Jason tried a fruit called pitallas and said to me, “Oopsy, I don’t like it.” A moment later, he told me, “Mama, I lied to you. I do like it because they’re sweet and they come in different colors.” It was special simply to be there with my son, where I lived my very happy childhood side by side with my siblings and parents.

Leaving Half of Myself

The day that we had to leave was sad for all of us, especially my mother. She was especially worried because, except for Jason, we had to cross the border as illegal immigrants. Her words were, “Please, my children, be careful. Try to stay together.”

For me it was very sad to leave my son. I wished we had the privilege of flying directly from Mexico to New York. That night, I said to my son, “You’re going to stay with Grandma, and when Papa and Mama are back in our little house in Brooklyn, a close friend of ours will bring you back.”

As we left, I felt I was leaving half of myself behind. It hurt so much to leave him. But I just hugged him, gave him a kiss and said, “We’ll be together again soon.”

Our trip was long and difficult. It lasted a week and a half. Two weeks after we left him, Jason was finally back at home with us, safe and sound. I was so happy to have his little body in my arms and to cover him with kisses. Finally I could say, “Thank you, God.”

I felt good about returning to New York, but nostalgic. At least I was able to see my adored mother.

Now my son knows the names of everyone in our family and sometimes he speaks on the phone with his grandparents and his cousins. When we look at photos together of the time when we were with the family, he says, “This is Laura, Melissa, Julia, Gullermina, mis abuelas…”

I have a lot of favorite pictures from that trip. I could describe them all. In one, we’re in my childhood home. In another, Jason is seated on a donkey. Another shows him with his cousins (who he now calls his sisters). We have a picture of him with his maternal and paternal grandparents, and one where he’s playing with his toys. Finally, there’s one of the whole family together.

Looking at the pictures, I feel so much joy that we had these moments and we captured some of them in photographs. I feel as if some of the happiness of that time lives in me again.