Catalino Rivera was my father. He wore a sombrero and a mustache 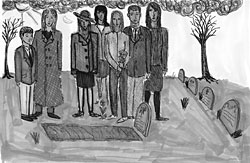 and he was a country man. He was strong and very strict, but also had a happy character.

My father and I were always very close. When I was growing up in Mexico, I followed him everywhere. He brought me around the countryside and to school on a bicycle. My father took us to the pool, to the rodeo, and taught us to sow corn and to cut wood.

When I was young, he always had a panaderia and made bread. I went with my mother, and later alone, to sell it in the market or door-to-door.

I married very young and left my homeland for 11 years. I couldn’t return for visits because of my illegal status in this country. But four years ago, my father’s heart was getting worse and I had to return to see him.

My return was very sad. He was already in a race against time. But at the same time my visit was something very beautiful, because I saw him. He was older, with more gray hairs, sick, but I was there with him. We hugged. I told him that I love him. We cried together.

What I’ll always remember is that he told me that he didn’t think I was going to come back home. I told him, “Here I am. I came to take care of you, and before God, you’re going to get better, because all of your family is here. Your three children have returned. We came from far away to see you because we love you.”

I was with my father in Mexico for two months, taking care of him and enjoying my return to his side. But the time flew past and the time for me to return to New York came closer.

A week before I had to leave, I had the opportunity to celebrate his 52nd birthday with the whole family. We were very happy.

The goodbye was very painful. Having to leave my father, who seemed in better health but was still in a delicate state, wasn’t something I wished to do.

We said goodbye April 29, 2003. I saw that my father was very sad. I tried not to realize it, but I felt sad too. I felt I had to be strong and not cry while I was saying goodbye.

My father gave me his blessing and a kiss and said to me, “My daughter, go. Take care of yourself. Say hello to your husband and your daughter. And if something happens during your trip or in a little while, don’t return for me, because I am not going to see you again.”

I said to him, “Papi, don’t say that. May God let me return soon. Let’s not say goodbye.”

I left him on the patio of the house, where he let himself fall into an armchair, and I saw that his tears flowed. But I tried to be strong and I smiled until the truck pulled out from in front of my house.

When I was four blocks away, I began weeping and screaming, because my heart told me it was a goodbye forever, and that I would never see him again.

Six days later I arrived in New York, and during this time my father relapsed. I spoke with my mother, who told me that Papa was good but sad.

That’s how three months passed. On July 28, 2003, I received the sad news that my father had died. His death hit me very hard. It was a hard moment for my whole family.

On the 29th I left New York for Mexico with my daughter, this time to give him a final goodbye, to bury my father.

He’d said, “If something happens in a short time, don’t return.” I couldn’t comply with what he asked of me. I know that he was concerned about the risks of the trip and the difficulty of returning to this country without papers. But thanks to God and my father’s blessing, I returned once more to see him before he left this earth.