In September I traveled with my 23-year-old son to speak at “Families for Life: Addressing the Needs of Older Children and Youth in Foster Care,” a conference convened by the Annie 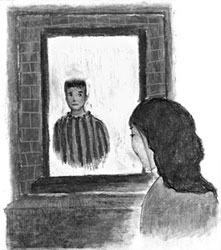 E. Casey Foundation. James and I were doing a workshop together about the strength of family bonds. Even though James and I were separated by my drug addiction and his adoption, our relationship is growing now.

I hoped that seeing the way my son and I connect in spite of our long separation would show foster care system staff and policymakers that reconnection can happen. My rights were terminated but our love did not end.

At the conference, I explained some of the history that led to James’ placement in foster care. When James was born in 1983, I was 21 and already had one child. We lived in Queens and I worked at the grocery store owned by my children’s father. I was comfortable. I was proud when James was born. But around 1986, my life started going downhill. First I found out that my kids’ father sold drugs out of the store. Then the feds came and busted all the drug dealers. The cops shut down the store and destroyed our house. My kids’ father ran and left us.

I didn’t know what to do. I had no income. I was pregnant with my fourth child. I was depending on public assistance. I wound up going to my sister’s in Brooklyn. She helped me out a lot, but I was stressed out. Being abandoned by my kids’ father also reminded me of my parents’ deaths when I was very young, and I was depressed. That’s when I started hanging out and was introduced to what we called freebase.
I started by using drugs on the weekends. Eventually I stopped coming home. Finally my sister gave me an ultimatum: Either come home and be a mother or stay in the streets. I chose to stay out.

A couple of years later, my sister moved with my kids to Virginia Beach. She got an 800 number so I could talk to my kids anytime, but after a while I just stopped calling.

One day I got a paper from court and I gave up my rights to my children. I found out years later that my sister adopted them. My sister didn’t want to do that, but the system threatened her. If she didn’t adopt, they were going to put the kids in other foster homes.

By 2004 I was drug free, raising my two youngest children with my husband, and working as a parent leader at the Child Welfare Organizing Project, an advocacy group for birth parents. I’d reconnected with my family and found out James was in the Army – in Iraq. By that time, my sister had died. James was looking to reconnect with me as well.

When he came home, I finally got a chance to talk with James. He was so young, yet he had seen a lot of things: Kids being blown up, bombs exploding close to his platoon. He said he had thought about me often and had wanted to see my again before he left this earth. We hugged and cried, then we laughed. I was proud of his strength and courage.

My family had only told James that I was sick. They hoped that one day I would tell James the whole truth. When I told him my story, he said he felt better hearing it from me. He asked me a lot of questions. I was straight and honest with him. I apologized for not being there for him and told him, “I can’t change the past. I’m just grateful that you still accept me.”

At the conference, James was honest when he spoke and so was I. I think he respected what I said to the group. He had tears in his eyes, but it felt good to be able to talk openly in front of him.

I think our workshop helped the system professionals remember the strength of children’s bonds with their parents, and their parents’ bonds with their kids. Love is permanent, not what is written in a court order. You can separate a mother and child but the love will still be there. I hope policymakers who hear our story will find ways to help birth parents and kids stay connected, even if there’s a long time when the parent cannot take care of her kids.

Of course, reconnecting isn’t easy. I think James has a lot more questions for me that he hasn’t asked. Some things he’s not ready to know yet, and I have to respect that. We just have to keep that communication going.

I love James. I love who he is. He’s comical, he makes me laugh, he makes my recovery feel worthwhile. I think my presence has made it a little easier for James to do what he has to do in his own life. I think he’s a little more comfortable now. The pressure of worrying whether I’m alive or dead is off him, and he doesn’t have to wonder, “Where’s my mom?” He can always pick up the phone and call me.